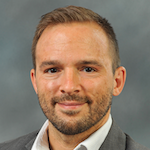 Alex Souza was named the assistant athletic director – digital initiatives in May of 2018.

Souza jokingly says his role encompasses “anything with a screen, that’s me” as he is in charge of all ESPN+ operations, liaison to linear TV when on campus, social media, graphic design, and video board maintenance and content.

Coastal produced over 130 events on ESPN+ in conjunction with the Sun Belt and Atlantic Sun Conferences last season, using student-workers, interns, or a partnership with a Recreation Sport Management sport media class as 95% of their crew.

While he has been in his current role for 4 years, 2021 – 22 is Souza’s 11th year at Coastal. From 2015 to 2018 he was the director of gameday experience and promotions, a marketing role, but still oversaw the production unit. After graduation from Coastal in 2008, Souza was the director of video services for four years, overseeing the creation of the video streaming unit, video boards, and a behind-the-scenes Coach’s show for nationally ranked CCU baseball that are locally and on regional sports networks.

In between stints at Coastal, Souza spent time with Syracuse Athletics as a videographer and editor, going to Final Fours for men’s basketball and men’s lacrosse. From 2013 – 2015, Souza was at the Colonial Athletic Association as one of the directors of video services. In this role, he focused on a (SVG Awards nominated!) feature series profiling student-athletes in football, men’s basketball, and women’s basketball.

Originally from Cotuit, MA, Souza graduated from Coastal Carolina with a Bachelor of Arts in communication, with a journalism minor. He was a three-year student worker in the Athletic Department and eight-time intramural soccer champion. 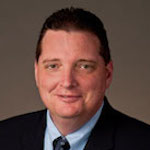 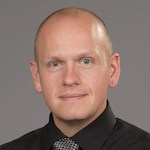